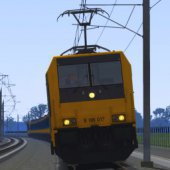 This package was originally intended as an exclusive set for Project Randstad, but due to increasing demand for this package, it was nevertheless decided to release it as a separate package for everyone. The set is meant to give routes an even more realistic picture, in my opinion overhead contact line is an important part of a route, because you constantly drive underneath it.

A lot of time has been devoted to the development and testing of the set, but due to the complexity of the set, it is quite possible that something has been overlooked, errors can be reported in the topic at the train point.

Note: Because this package relies on realism, it is an extensive and complicated package, placing realistic overhead wires takes a lot of time. Read this manual carefully!